I [heart] The Monster Hero- is winsome musical collage, a mash-up of primitive sounds that toe the line between lo-fi and no-fi but together manage to engender an instinctively hooking, bubbly sunshine pop. http://breakingtunes.com/iheartthemonsterhero
The Holy Sparks!!! - Are three men with various instruments, of differing heights who make music. You can hear that music here; http://theholysparks.bandcamp.com/
George Worrall - Dubliner George took up guitar blues at age 13 and hasn't stopped since, although he's incorporated a bit of country and jazz into his sound in the intervening years. His sound draws on early 20th century folk blues, with guitar work reminiscent of innovators such as John Fahey and Jim O’ Rourke. http://www.myspace.com/georgeworrall
Earl Mustard- aka visual artist James Mongey, Earl was one half of the cult Dublin art-punk outfit Hoovers and Sledgehammers. This is his solo incarnation, ahead of a debut album due to be released in the autumn. www.jamesmongey.com

About Pieta House; Pieta House, the suicide and self-harm crisis centre, officially opened its doors in Lucan, Co. Dublin in January 2006. The unique clinically based model developed by Pieta House is used across their five centres in Dublin and Limerick. There are also active discussions in progress to open centres in Galway, Cork and Roscrea. Pieta House provides a professional, face-to-face, free of charge therapeutic service for people in the acute stages of distress. Its primary aim is to reduce suicide by helping people get through that critical phase when suicide becomes a plan rather than just an idea. Since 2006, Pieta House has grown to almost 80 therapists and staff. Demand for their services is constantly on the rise. To date over 6,000 people have been seen and helped by Pieta House. Pieta House’s vision is that no-one in Ireland should be more than 100 kilometres from a Pieta House centre where they can avail of the clinical services at that time of crisis. For more information log on to www.pieta.ie

ABOUT DLR - Drunken Lust Records was set up in 2008 as a collective which aimed to release and distribute recordings, organise shows and generally get good music to receptive ears. After something of a hiatus, we're back in business and hope to have a full calendar of releases in 2012. www.drunkenlustrecords.com

dlr010 the holy sparks!!! plots of the patriarchs

Plots of The Patriarchs EP (DLR 010) by the holy sparks The Holy Sparks!!! are a trio obsessed with historical villains, dark shadows and eternal truths. A wide variety of instruments and influences are mixed to produce their sound. Their debut 4 track EP 'plots of the patriarchs' is released on drunkenlust records on 8th dec, and will be available freely from www.drunkenlustrecords.com. Taking musical cues from a variety of genres including garage, kraut, folk, and prog rock, and lyrical inspiration form history, alchemy, current politics and sci-fi, this ep was self recorded and produced by the band in the autumn of 2012. Their recent promo video ''ming!'' has been described as ''a somewhat energetic new wave, almost gothic offering from Dublin, whose bass punches and throbs, while heightened guitars exchange taunts with vocals, shrouded by haunt(ed) low-end reverb.''(the weekend polution blog). They are becoming noticed as a band with a … 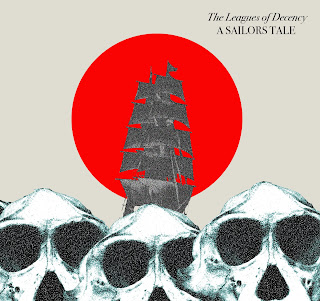 A Sailor's Tale (DLR014) by The Leagues of Decency
The Leagues of Decency: are the long term studio/side project of EJ Cotter (the holy sparks!!!, the bastard rain). The album’a sailor’s tale’ (released on 30th Nov) marks a departure from the largely instrumental 2012 release ‘EP’, telling the narrative of the journeys and transitions of the eponymous sailor as he makes his perilous journey there and back again. The album was largely self-recorded over a period of almost 4 years, in a variety of north inner city locations (including A3XA studios), and mastered by Stephen Quinn (analog heart). The music draws on a wide palette of sounds and styles; Electronic waves wash over banjo led sea shanties, and scuzzy lounge stompers give way to plaintive ballads, as the tale of adventure, occult wanderings, and loss is spun across the albums 12 tracks. The album will be available free streaming or download from drunkenlustrecords.net, while physical copies will be on sale in Tower records &…