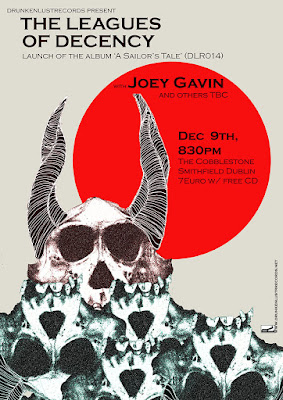 DRUNKENLUST RECORDS PRESENT;
The Leagues Of Decency
Joey Gavin
& others tbc
(Launch of the Leagues of Decency debut album ‘A Sailors Tale’ on drunken lust records)
Dec 9th, 830 pm
The Cobblestone, Smithfield,
Admission 7 Euro (w/Free copy of Album for first 30 attendees)
FB event: https://www.facebook.com/events/271028366721737/
Images: https://drive.google.com/open?id=0B1rcuTps4wWOc1FfX2lxNGNyX3M
www.drunkenlustrecords.com
The Leagues of Decency: are the long term studio/side project of EJ Cotter (the holy sparks!!!, the bastard rain). The forthcoming album’a sailor’s tale’ (due for release on 30th Nov) marks a departure from the largely instrumental 2012 release ‘EP’, and draws on a wide range of musical influences, from Trad to electronica, to stitch together a stirring tale of adventure, terror, and loss as it charts the journeys and transitions of the eponymous sailor as he makes his perilous journey there and back again….….the album will be launched with a specially assembled band featuring Phil Murray (glimmermen, holy ghost fathers), Paddy Walsh (I heart the monster hero), and Hugh Mcabe (spook of the thirteenth lock, Large Mound) playing the album in the full.
FB:     https://www.facebook.com/The-Leagues-of-Decency-1702447486722625/
SoundCloud:   https://soundcloud.com/asailors_tale/sets/were-coming-down-from-the
YouTube: https://www.youtube.com/watch?v=rj2Dv15S5u4
Bandcamp: https://drunkenlustrecords.bandcamp.com/album/ep-dlr-008
Joey Gavin; established himself as a local favourite in the Dublin scene, as a former member of noise-pop band THUMPER and also as a solo artist, playing with home-town staples such as Otherkin, Cathy Davey and Paddy Hanna.. He has been described as ‘’ an artist you sense can impulsively switch between contemplative subject matter and more forthright musings, darkness and light, and back again, without a second thought.’’
He recently relased the single "Run/Rolf" on Little L Records; "Rolf" muses on Rolf Harris' murky actions and the disillusionment which comes with the influential figure's fall from grace. The track also references the discovery of a mass grave in Bon Secours Mother and Baby Home in Tuam.  It is a message of lament and anger at innocence lost by the hands of power.

new video to the haunting 'skeleton women of baggot st' released by the holy sparks!!! Track is taken from the forthcoming album 'across the endless seas' - due out on drunkenlust records in early 2014.

dlr010 the holy sparks!!! plots of the patriarchs

Plots of The Patriarchs EP (DLR 010) by the holy sparks The Holy Sparks!!! are a trio obsessed with historical villains, dark shadows and eternal truths. A wide variety of instruments and influences are mixed to produce their sound. Their debut 4 track EP 'plots of the patriarchs' is released on drunkenlust records on 8th dec, and will be available freely from www.drunkenlustrecords.com. Taking musical cues from a variety of genres including garage, kraut, folk, and prog rock, and lyrical inspiration form history, alchemy, current politics and sci-fi, this ep was self recorded and produced by the band in the autumn of 2012. Their recent promo video ''ming!'' has been described as ''a somewhat energetic new wave, almost gothic offering from Dublin, whose bass punches and throbs, while heightened guitars exchange taunts with vocals, shrouded by haunt(ed) low-end reverb.''(the weekend polution blog). They are becoming noticed as a band with a …